There is no doubt that IoT is here to stay, mainly in areas such as manufacturing and transportation where there are clear benefits to connecting devices such as energy efficiency. Industrial IoT (IIoT), in particular, is being increasingly adopted as early adopters have successfully used the technology to remove inefficiencies, prevent errors, and optimize yields with real-time adjustments.

Consumer products using IoT have had more varied results. Some, such as Nest, Philips Hue, and Alexa-powered products, have become popular. Others have failed due to poor implementation or having the costs of IoT outweigh the benefits gained.

Not every consumer wants to use a product that is always watching or listening to them. They demand more transparency, privacy, and options from vendors. Nest recently experienced a public consumer backlash over the presence of undisclosed microphones in their security systems, and the U.S. Senate is questioning Google about the practice.

This isn’t to steer everyone away from IoT, but to emphasize that as important as the technology development can be, planning around service design, cost-benefit analysis, and safety precautions are the factors that determine success. The most advanced and connected technology will fail if there’s no reason to use it. It will also fail if it does not protect the sensitive data of its users.

How can a company start creating an IoT product, or adding IoT capabilities to an existing product?

It’s nearly impossible to find one person or company that is the master of all fields related to IoT. Here’s a short list:

Even so, anyone - whether a manager, designer, engineer, data scientist, or wizard - can conceptualize IoT at a high level to determine whether it makes sense for a specific use case, and agree on best practices for implementation.

Back to the initial question. What exactly IS IoT? Moreover, could any connected device be an IoT device?

One could argue that the ATM around the corner is an IoT product. Each ATM is connected to bank servers. It uses that connection to look up an account, verify it with a PIN, and determine whether to dispense money and change the customer’s balance.

Alternatively, take a home security camera with an internet connection. Users can see what’s going on in real time and perhaps access a historical record. However, if that’s all it does, and if a user is not watching the camera 24/7, he or she could miss an intruder entering until it’s too late.

To solve this problem, the customer could hire a firm to watch the video 24/7, or use a basic machine learning algorithm to notice intruders and sound an alarm. However, the security system won’t reach its full potential until it can handle multiple devices, with each new device adding value to the overall system. This is true for all IoT systems.

The whole point of IoT is that the sum of the parts is much more powerful than the individual components. Considering automation and interactions between devices types is vital when designing easy to use and flexible products.

Technically any connected product is a Thing connected to the Internet. While each individual Thing is valuable, and implementing that Internet connection adds value as well, the real potential value of IoT comes from the service or services that it enables, which become more powerful and customizable (and thus more valuable to the user) with the ability to integrate multiple devices. (Also see That Thing You Bought Isn’t a Thing, It’s a Service).

Now imagine the camera using a machine learning algorithm powered by data from other users with the same device, and better able to detect intruders and prevent false alarms. Perhaps it uses other cameras or sound sensors to notice intruders that have evaded the first alarm. And with connected cameras being widely adopted, users now receive alerts if there are break-ins or other suspicious reports in their neighborhood.

An outdoor security camera could detect bird and other animal species. A system of such cameras could be used by conservationists to track biodiversity changes and migration patterns, or by pest control to target homes with undesired wildlife.

By using multiple connected devices to augment each other’s functionality, greater value can be discovered and generated. Connected cars, for instance, crowdsource data from other drivers, satellites, and road conditions to optimize navigation. Self-driving cars use a machine learning algorithm that uses data from other cars driven (or self-driving) to learn how to handle a wide variety of conditions. As the system grows and more devices are being bought, the entire system’s value increases exponentially rather than linearly. This is where the magic is, and what separates IoT from just having a device talking to the Internet.

Connected devices are usually the first step for companies that want to explore the potential of IoT. However, if they stop at that point without looking further, they may be missing most of the potential business value that can be gleaned from the system - and the major question to be asking, before beginning an IoT project, is “Where can I get the most value from this product?”

Here is one model to think about how IoT projects can grow in complexity, and correspondingly, value: the IoT Extensibility Framework, taken from The Amazon Way on IoT. This describes four increasingly complex levels of IoT projects. 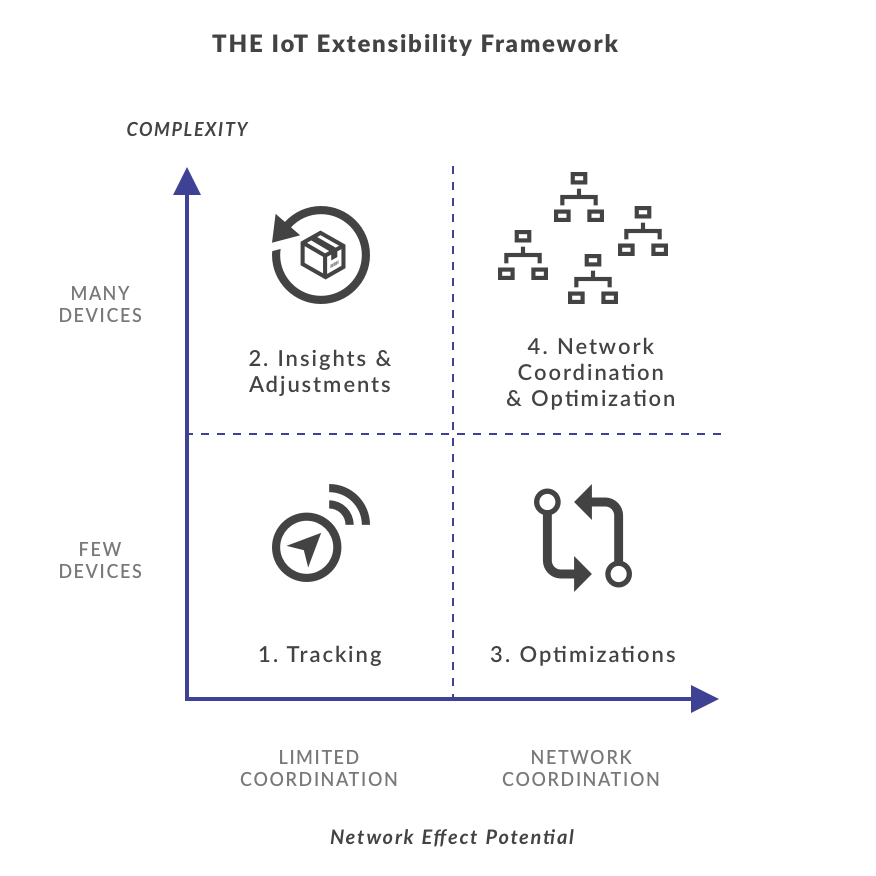 Source: Diagram was taken from The Amazon Way on IoT, page 8.

A Level 1 product tracks and collects data. One example is the first type of security camera discussed earlier, which sends video to the cloud when someone else walks by. Beyond the basic use case, the product has little additional value. It is not designed to use other sources of data and does not incorporate analytics or real-time changes to the environment.

Level 2 products add insights and the ability to perform real-time adjustments based on data. Fitbit, for example, has the ability to recognize what activity the user is engaged in automatically, and it refines and improves its auto-recognize algorithm whenever a user manually reports that he or she has performed a specific activity. Many industrial manufacturing apps also make heavy use of analytics and machine learning. With the extra insights gained, this is an excellent phase to start laying the foundation for the next steps.

At level 3, products start incorporating multiple devices of the same type performing optimizations and may make real-time changes to an actuator. A system of wind speed sensors determines the best angle to position a wind turbine for energy generation.

At level 4, multiple types of devices join the dance. The insights and accuracy of the system increase with their quantity and variety:

The point of the extensibility framework is not to tell you that all of your products must be at level 4. It is to help you consider how value could be added to your product through future extensibility, and encourage you to design and develop with that functionality in mind. Systems that use open source technology, and can thus integrate with many devices with a bit more work, have much more potential for extensibility than proprietary, closed systems. Your circumstances will ultimately determine the direction you take, but it is important to argue, especially to companies that are new to IoT or accustomed to using proprietary systems, that closing off the ability to extend your product’s functionality will limit the value you gain from the system.

Design Around Services and Data

IoT is more than the sum of its parts. It is not just about the Internet, or the Thing - it is about the services that are enabled by having multiple devices communicating. If you want to make a product connected, try not to stop at thinking “How smart can I make my TV?” Think in terms of the services your system, including that connected device, will enable. IoT, at its core, is service design.

When developing a product, keep the potential for extensibility in mind, using a framework such as Amazon’s 4-level framework if that helps. Keep the possibilities open to realize the full value of using IoT.

Finally, be aware of the data you want and need to use, and always keep privacy and security in mind. Can you deliver a valuable product without requiring sensitive user information?

There are many fields and facets to IoT design and development, but they don’t have to all be mastered to get started. Companies and individuals that frame IoT as service design, plan for extensibility and address data handling are well on their way to creating products that add real, significant value for their customers.

Product Strategy: How to Give Your Customers What They Really Want
All the tools you need to launch a new product with your customers top of mind.
Improving the Travel Experience for 224 Million Passengers
A Q&A with Designer Virginia Wood on designing an app to make air travel less terrible.
Rethinking the Relationship Between Service Design and Space Design
Space design can make your service strategy stand out to users and businesses.